As the federal fiscal year winds down, agencies are looking for creative ways to dump requirements and spend excess funds so their budgets won’t get cut next year. This is especially relevant this year as agencies scramble to spend funds that were left sitting during the longest government shutdown in history. So, what does that mean for government contractors? Lots of shiny, new RFPs are being released.

It can be all too easy to get lost in RFPs during the end-of-fiscal year whirlwind, but if you play your cards right you can easily capitalize on these pop-up opportunities. Here are a few ways your company can get the most out of agencies sloughing off end of year funds:

If an opportunity pops up that was previously in your pipeline and capture plan, only consider bidding on it if, and only if, you have the resources to do so. When you have to take resources away from other opportunities you are working on, you reduce your overall PWIN. Once you establish that you do have the extra resources, match your capabilities to the sourcing document. If you are a near perfect match, it can’t hurt to go after this opportunity and you might even get some business you wouldn’t have previously. 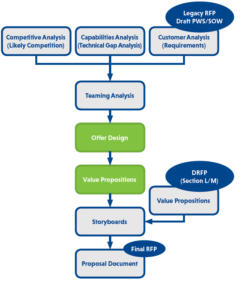 When you decide to bid on an opportunity that is not in your original capture plan for the year, adopt a streamlined framework that allows you to break down the traditional pursuit process into digestible chunks. We recommend this one from David Goulla, Founder and Principal Partner at IDIQ results:

If you don’t have any extra resources to spare this proposal season, put your blinders on and do not bid on any last minute RFPs that were not originally in your capture plan. Doing so will weaken your overall efforts, frustrate your team, and give the customer the perception you are bidding just to bid. Additionally, all the other companies in your market are going to see the last-minute bid notification and submit proposals as well, so avoid wasting time and resources on a distraction that is an unlikely bid.